skip to main | skip to sidebar

Wishes for the New Year

We Georgetown Visitation sisters wish our friends God's choicest blessings for the new year 2012. We place each one in prayer under the protection of Holy Mother Mary on this solemnity in Her honor, January 1st! 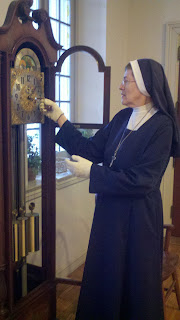 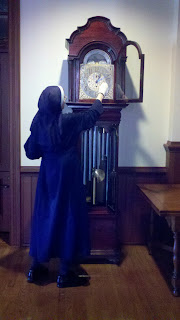 Another sisters' life from the archives: Mary Bernardina McNantz (Part I)

Part I of II
Mary Bernardina McNantz was the birth sister to two others in the community, Isidora and Mary Leonard McNantz. Bernardina was the oldest of the three and only nine when she entered our school. She had a cheerful disposition and was inclined to be fond of the world, but the good example of her sister Isidora helped her turn away from vanity and apply herself earnestly to the practice of virtue. She was bright and took delight in her studies. She did have a rather quick temper, but she endeavored to subdue and overcome it.

Leonard Neale received Bernardina to the habit on August 15, 1817, the feast of the glorious Assumption of the Blessed Virgin, and the same day as her classmate, Susan Angela Boarman (see previous biography); she was fifteen years old. Bernardina was a fervent and exact Novice, to the point where at first she was a bit scrupulous, a problematic characteristic that can sometimes accompany a purity of conscience as great as hers. She improved through prudent care and attention to the instruction of her Director, Mother Harriet Agnes Brent, for whom she had great affection and to whom she opened her heart with simplicity and candor. She punctually took Mother’s advice, and although she sometimes warred within herself to overcome a tendency to judge others, she performed faithfully and became an example of docility and submission to all the Novices.

She made her holy profession the next year on August 21, 1818, the Feast of our holy foundress and Mother, along with Sister Susan Angela Boarman, whom she survived by only one month. Because of weak health she could not finish the second year of her Novitiate, and she sometimes lamented this, for she had an excellent mind and many abilities, and she would have rendered considerable service to religion if her health had not intervened. God, however, took care to purify her with many interior trials, which he used to supplement any deficiency in the exterior trials of the Novitiate which would have been too much for her. She also had a natural sensibility to practice interior self-denial. Bernardina was quite pretty; our physician Dr. Beaty, when called in to consult about her health, saw the floridness of her complexion and said “It was a pity such a beauty should be hidden in a monastery.”

Because of her active, bright mind, she had a great desire to read and know all the books of our order, and to imbibe the true Spirit of the Visitation. These books, however, were nearly all in French, so Father Clorivière agreed to teach the language to some of the sisters, including her.  She applied herself, and in a short time she translated our small books of customs and part of the responses of our holy Mother to them, but unfortunately for us she was forced to stop. Not only did she have a talent for languages, but also for drawing, painting, writing, and embroidery. She left us a memorial of her industry in her embroidery of a fine vestment, which she finished on the eve of her last illness, October 30, 1821. This vestment eventually served in the dedication of our church, which took place on the first day of November, the Feast of All Saints that same year, but unfortunately this poor sister could not attend. It seemed a great pity since she had worked so hard on it, but God had other views unknown to the community.

She had long prayed to be preserved until the age when she would be able to inherit her estate for the benefit of the community, but now that seemed impossible, although the sisters were only concerned about her health. She had been threatened with consumption (tuberculosis) all of her life, and two years prior to this she had a persistent cough that Dr. Beaty first attributed to a “bilious fever,” meaning a fever accompanied by nausea, vomiting, and diarrhea. Her behavior became erratic: “Some thought her crazy! Others that she was possessed of a devil! Some were even for having her exorcised!” Instead of any of this, however, the community joined in prayer for her.
Posted by a Visitation Sister at 9:00 am 3 comments:

Keeping with a longstanding tradition, several students and alumnae joined the Sisters in the Neale parlor for a rousing hour of Christmas carol singing and a few refreshments as school dismissed for the Christmas vacation. Alumnae Patricia Lawless '05, Colette Young '07 and their parents, John & Barbara Lawless and Robert Young and Ginny Lum, organized and led this year's festivities. Old favorites such as "Silent Night" and "O Come All Ye Faithful" were interspersed with lively renditions of "The 12 Days of Christmas" and "Jingle Bells" making for a perfect blend of both the spiritual and the joyous emotions that this beautiful time of year arouses. 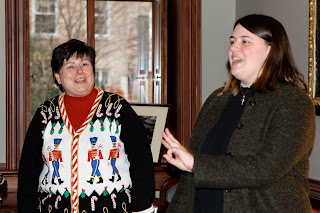 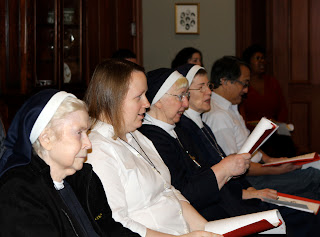 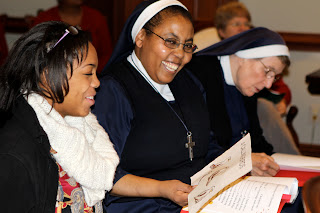 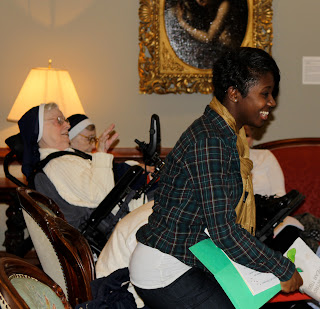 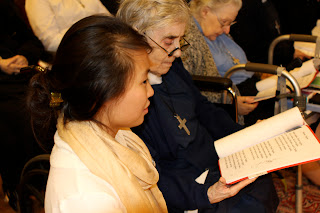 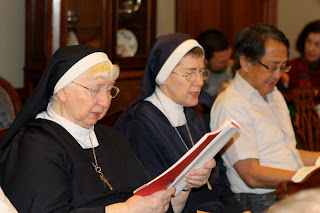 We sisters wish you a Blessed Christmas Season!
May the Divine Infant Jesus bless and protect you!
In the joy of Our Incarnate Lord,
Your Visitation Sisters of Georgetown
Posted by a Visitation Sister at 10:04 am No comments: 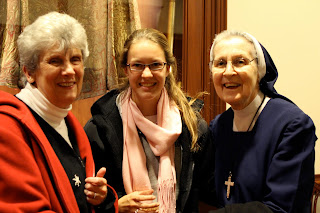 Mother Jackie smiles with a grandmother and granddaughter at the reception following our Grandparents' Day Service of Lessons and Carols on Monday, December 12. This annual event gives grandparents a chance to glimpse their granddaughters' school and sample a bit of what makes Visitation so special.

The service opens with a welcome from President Emerita Sr. Mary Berchmans, and it features performances by Visitation's Dance Ensemble, Irish Dance Club, Chorus and Madrigals. There are readings, and of course a recounting of the birth of the infant Jesus from the Gospel of Luke. Remarks by a grandparent and Head of School Dan Kerns close the service.

The Nolan Center is always packed with grandparents who are delighted with the event. Afterward, everyone adjourns to the parlors in Founders Hall for refreshments. Many also relish the chance to touch base with the Sisters who are always special guests on this special day.
Posted by a Visitation Sister at 7:08 pm No comments:

Vespers With the Sisters

We have hosted this event for a few years as a way of thanking major donors and other members of our community for their generosity and support during the previous year. It has become hugely popular, and attendees always remark on what a gift  it is--both the spiritual component (Vespers) and the chance to visit with Sisters and others in the community. It's a wonderful start to the holidays; a time to step back, pause, reflect and reconnect with the reasons for the season: faith, friends and family. 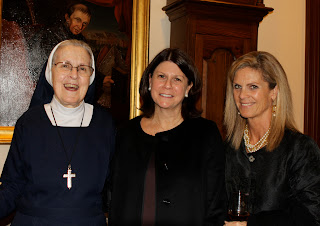 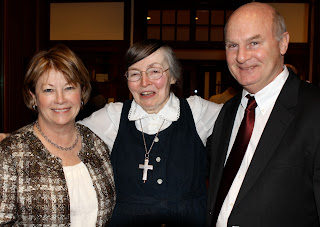 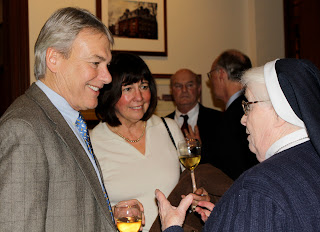 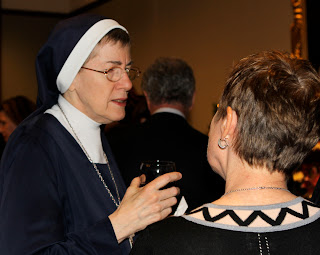 Posted by a Visitation Sister at 2:45 pm No comments:

Photos from a Christmas carol event 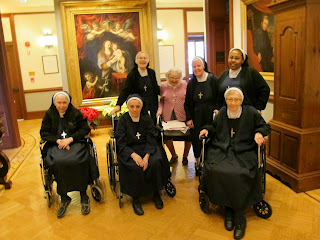 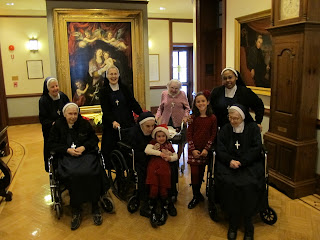 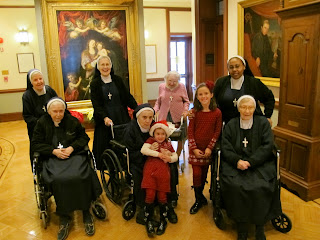 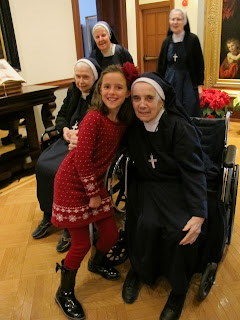 Posted by a Visitation Sister at 7:32 pm No comments:

Sr. Mary Roberta loves this version of "Stand By Me"

Posted by a Visitation Sister at 9:43 pm No comments:

Susan Angela Boarman was born in Kentucky to a Catholic family on May 20, 1801. Her parents normally lived in Maryland, but they had gone to Kentucky to settle some family affairs. After they returned to Maryland, Angela’s mother died. When Angela was 10 years old her father brought both her and her sister Mary Ann, who became Sister Benedict Joseph, to our academy to be educated.
Angela was inclined to vanity, but through the good example of some of her companions and the pious discourse of Mother Ann Catherine Rigden, to whom she was much attached, she gradually turned her heart to piety and decided she would “dedicate her heart to God in the religious state.” She had the happiness of having Leonard Neale as her Director, and when she was 15 he admitted her to the habit of our order on August 15, 1816, the feast of the Glorious Assumption of the Blessed Virgin, to whom this dear sister had a tender devotion.  She showed much fervor, joined with a great simplicity, and applied herself earnestly to subdue the nature within her and to be perfect in obedience. In 1817 she made her religious profession on the feast of our Holy Mother, St. Jane de Chantal. She did this together with our dear sister Mary Bernardina McNantz, who died about a month after Angela did.
Angela had a charitable heart, and was always mindful of the needs of others. Ever compassionate toward the sick, she would often deprive herself of her own rest for their relief. She even risked her health, especially during the illness of Mother Ann Catherine Rigden, where she paid assiduous and almost uninterrupted attention to Mother’s needs. She began to waste away, and in a few months she developed “consumption” (tuberculosis). She met her illness with courage and proof of her charity, for as weak as she was, she rose every morning with the community to assist at the hour’s meditation, attend the choir, and follow the community in everything.  No one could convince her to relax in the slightest way from her accustomed duties, and she would not accept any nourishment beyond what was given to the rest of the community.  Sometimes she was found in such a state that they thought she was dead, and though she increased in virtue, she decreased so much in strength that she finally yielded and allowed them to place her in the infirmary toward the end of November, 1821. Even so, she forced herself to be present at the meetings of the community as often as she could, but by the beginning of January, 1822, she was unable to leave the infirmary at all.
She was still charitable and attentive to all around her, and before anyone could put herself to the smallest inconvenience Angela would anticipate the impulse and stop her. For example, it was terribly cold on the nights prior to her death, and Angela would ask quite pointedly if the attending sisters had provided for themselves against the cold. She would not be content, even up to the very night of her death, until she was assured that they had taken care of themselves as she desired. Three months before her 21st birthday, “[s]he breathed forth her free soul into the hands of its maker with the peace and tranquility of an angel on the 11th day of January, 1822, having enjoyed her perfect presence of mind to the very last gasp.” She held the rank of choir sister, and had served the community in the offices of Sacristan Vigilant, and Assistant at the school.
Posted by a Visitation Sister at 9:42 pm No comments:

The Monastery of the Visitation (Georgetown)

The Order of the Visitation of Holy Mary was founded in 1610 by Saint Francis de Sales and Saint Jane de Chantal. Our Monastery of Georgetown was established by Archbishop Leonard Neale in 1799.